If you’re a basketball fan like me, you’ll be eagerly awaiting the return of the Chicago Bulls’ explosive point guard, Derrick Rose.  Rose missed the whole of the 2012-13 NBA season after suffering a torn ACL the previous year, and a few months ago, I wrote a piece about him and some of the psychological factors that should be taken into account during an athlete’s return to play following injury. You can read it here if you like. It’s not bad.

There are psychological as well as physical consequences of sports injuries.

But one thing that I glossed over was the psychological impact that injuries can have on athletes, and the ways in which they attempt to cope with these often stressful, sometimes traumatic, events. So in this post, I’m going to try to summarise some of the ways that athletes respond to injury

END_OF_DOCUMENT_TOKEN_TO_BE_REPLACED

So a little while ago, I wrote a piece about whether or not we deserve better from our sporting heroes. The long and short of it was that on what seems like too many occasions, coaches, parents, clubs, sports organisations, the media – pretty much anyone and everyone – do far too much to protect athletes because, hey, they’re really good at running and jumping and kicking and stuff.

This week, League One football club, Sheffield United, signed Marlon King on a deal until the end of this 2013/14 season. Now if you don’t know who Marlon King is

END_OF_DOCUMENT_TOKEN_TO_BE_REPLACED

Derrick Rose sitting on the Chicago Bulls’ bench in a suit and tie became a familiar sight towards the end of the 2012-13 NBA season. 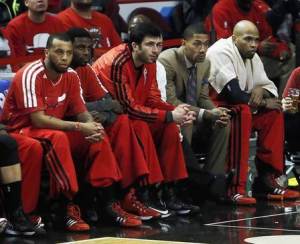 One-time league MVP, Rose, underwent surgery to repair a torn anterior cruciate ligament in May, 2012, after getting injured in that year’s playoffs. But after several weeks of “will he/won’t he” speculation, Rose did not make his much anticipated return to the Bulls’ line-up, despite being delared medically fit to play.

Recovery from injury is not just about the physical rehabilitation of the athlete. Injury can have a psychological impact too, so returning to play can be a difficult time for any athlete

END_OF_DOCUMENT_TOKEN_TO_BE_REPLACED

The undergraduate degree. The postgraduate degree. Supervised practice. Attending conferences and presenting research. ‘Networking’ and making contacts. Trying to gain voluntary work while trying to earn a living. The path to becoming a Sport Psychologist isn’t an easy one, but Rory Mack is making his way down that path, and is just about to start his BPS Stage 2 training. 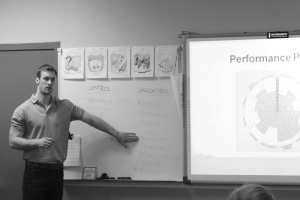 END_OF_DOCUMENT_TOKEN_TO_BE_REPLACED

Many of these people have been kicking, throwing and hitting balls since they were very young and have got so good at it that millionaires are willing to pay them lots of money to continue doing it, and we, the people, are willing to pay sometimes extraordinary amounts to watch them.

END_OF_DOCUMENT_TOKEN_TO_BE_REPLACED

A couple of weeks ago, Steph Curry of the Golden State Warriors went crazy (yes, that’s the correct psychological term) and hit 11 of 13 three pointers on his way to scoring 54 points against the Knicks. A week later, Deron Williams of the Brooklyn Nets, went absolutely nuts (yup, fine) and hit 7 from 7 three pointers in the 1st quarter (9-11 by half time) and finished with 42 points.

Yesterday, Boston College freshman, Olivier Hanlan, hit 12 shots in a row (14-18 overall, including 8-10 three pointers) on his way to 41 points against Georgia Tech. All examples of spectacular shooting, and all examples that got me thinking about what basketball players, fans, and commentators describe as “the hot hand”.

The hot hand is described as “a belief that the performance of a player during  a particular period is significantly better than expected on the basis of the player’s overall record”.¹  In other words, if a player hits a couple of shots in a row, people tend to think that he’ll make his next shot too.  But in actual fact

END_OF_DOCUMENT_TOKEN_TO_BE_REPLACED

So I’ve been doing some consultancy work in boxing for a while now, and it’s safe to say that it’s a sport that’s unlike any of the sports that I’ve worked in before.  It’s a brutal sport, there’s no getting away from it.  The aim is to punch your opponent until he/she can’t punch you back any more.

However, it’s also a sport that requires not only immense physical strength and stamina, but also discipline and control, and the ability to think tactically and strategically while under pressure.  So in some ways, I suppose it’s not that dissimilar to other sports after all.

People will tell you that boxing is 80% mental.  …or maybe 90% mental. …. or 95% mental…. The bottom line is, nobody would question that boxers have to be mentally tough ….  but what exactly is mental toughness, and how can Sport Psychology help boxers develop it?

END_OF_DOCUMENT_TOKEN_TO_BE_REPLACED

It is well established that coaching can be a stressful occupation and that coaches should really be considered as performers in their own right. In part one, of this blog post, I questioned the availability and accessibility of coaching/psychology research for the coaches that could benefit from it. I also discussed what stress actually is and how the stress process works.

Part two looked at some of  my research into elite coaches’ experiences of stress, the kinds of environmental demands they encounter, the sometimes significant impact that stressors can have on coaches, and the sorts of things that coaches do (or don’t do) to cope with stress. Here in part three, I’ll be summarising some of the ways that sport psychology might help coaches to coach more effectively when the pressure is on.

END_OF_DOCUMENT_TOKEN_TO_BE_REPLACED

Coaching can be stressful. While coaching manuals often talk about the different roles that coaches take on, this doesn’t really cover the complexity of the coaching role. At the end of the day, coaches are performers1.

They perform in very different ways to their athletes, but they still have to prepare meticulously for training and competition, execute plans in pressurised competition settings, and handle pressure from the media, often with funding, and the future of their sports programmes (i.e., their jobs) on the line. So yes, coaching can be stressful.

In part one, I wondered how many coaches read the Journal of Applied Sport Psychology on the off-chance that there might be a useful article on coaching psychology in there?

END_OF_DOCUMENT_TOKEN_TO_BE_REPLACED

Twitter is great. I mean, at first I thought it was an outlet for the self-indulgent, a way for people to let strangers know what they had for breakfast, or that they were annoyed at something on the TV. I kinda still think that’s what it is, but I’ve also started to realise how useful it is as a tool for sharing information. I’m constantly being directed to interesting articles that I otherwise wouldn’t normally come across or have time to look for myself.

For example, the other day I saw a tweet linking to a BBC news story about elite coaching (here), and how the England Rugby coaches handle the pressure of competition. Now, I wrote my PhD thesis on stress in elite sports coaching. I spent four and half years studying this subject. Three of the four studies have been published in peer-reviewed journals and the fourth is about to be submitted… but how many coaches know about that research?