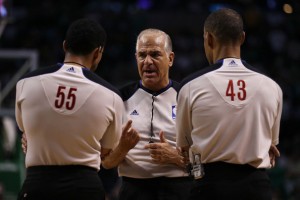 Everyone loves these guys!

If the theme of Game 1 was ‘beating the heat’, the theme of Game 2 was definitely ‘keeping cool’.  But this time, it wasn’t a broken air conditioning system that was causing players’ temperatures to rise. It was another one of those damn uncontrollables – the refs.

Every player knows that the refs won’t call two games in exactly the same way. No matter what the sport, while referees aim for consistency, you just know that some days you’re gonna get calls, some days you’re not. It was clear from the start that the referees had made an adjustment from Game 1 and were allowing much more contact in Game 2.

In the first half, there was just too much complaining and moaning to the officials from both the Spurs and the Heat. It seemed like they were arguing every single call. There wasn’t a single technical foul called in any of the 2013 Finals’ seven games. In Game 2 of the 2014 Finals, both Tim Duncan and LeBron James picked up technical fouls in the first half, while arguing over referees’ decisions. In fairness, both calls were terrible, but that’s not the point.

Athletes need to be able to make in-game adjustments based on what’s going on. Like I mentioned in the Game 1 post, mentally tough athletes aren’t controlled by their environments (which include referees); they take control. Both teams have the same referees, so I’m not going to let a few bad calls take me out of my game. 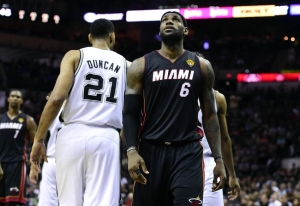 Let’s look at it as a pure numbers game:

“Try reacting to each and every referee’s call by focusing on what your job is in that exact moment.”

You might say that protesting about a call is going to get you a favourable call later, but that doesn’t’ really happen very often and it only happens if the ref truly thinks they could have made a mistake. What’s more likely to happen is that while you’re arguing with the referee, you’re missing a defensive assignment, letting the other team get a fast-break lay-up, and essentially letting your team down.

So you can’t control what the referees are going to call or not call, but you can control your reaction to it. Try it the next time you play. Try reacting to each and every referee’s call by focusing on what your job is in that exact moment. 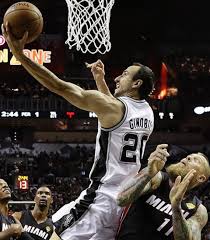 One of my all-time favourite players. The ultimate competitor, Manu GINOBILI!

So back to Game 2. Both teams made adjustments. The second half was much better than the first, and both teams came to play. But there were two crucial plays in the final few minutes of the game. With 1.43 remaining, LeBron James stripped the ball from Tony Parker on the baseline.

Because it was in the last two minutes, the referees were able to review the play, yet despite the replays showing the ball clearly (mostly clearly) touching Parker last, the Spurs were given possession. Yes, there was some brief muttering, but the Heat were able to put the call behind them, focus on playing defence for 0.8 seconds, and execute their offence on the next play.

On the very next play, Spurs’ Manu Ginobili appeared to get hit in the face, but there was no call. He appeared momentarily distracted, frustrated with the lack of a whistle, and the result was a Spurs turnover. Now it’s not easy to get hit in the face and just ignore it, but that’s exactly what you have to do. Keep playing.

So whether you’re an athlete or a coach (or a parent!), think about how you react to referees in your sport? Is your reaction productive, or is it taking your attention and focus away from where it should be? More often than not, it’s the second option.

Think about how you can take control of your own reactions? Think about what you can do to keep cool, and react in a positive, productive way, even if you’re one of those people who has never committed a foul in their lives.

4 comments for “Psychology of the NBA Finals: Game 2”