The series was tied 1-1 going into Game 3 in Miami. The Spurs had managed to do a better job of not being distracted by the literally uncontrollable temperature in Game 1, and Danny Green came through with some Short Memory Shooting in the 4th quarter. In Game 2, another uncontrollable factor, the referees, left both teams struggling to find their rhythm early on and it was the Heat this time, that did the better job of refocusing quickly after bad calls. So what were the key themes of Game 3?

Be Aggressive and Do Your Thing 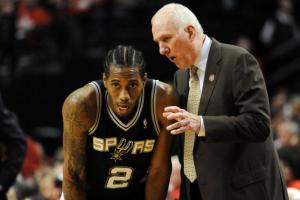 “Be more aggressive!”
“Okay Coach. Will do.”

So being aggressive doesn’t mean going around hitting people and generally being a knob. I suppose assertive might be a better word. Hmmm, no I’ll stick with aggressive for now. Kawhi Leonard had been marked as a key performer for the Spurs coming into this year’s Finals, yet after scoring 9 points in each of Games 1 and 2, several sections of the media were asking “Where’s Kawhi?”

Leonard answered by scoring 16 points in the first quarter of Game 3 (he finished with a game high 29 points on 10-13 from the field).

The difference? Being aggressive. Attacking the basket, and not letting the Heat defence dictate his play. But it wasn’t just Leonard. The Spurs team tore the Heat a new one in the first half. They hit 19 of their first 21 shots from the field. Just think about that for a minute. At one point they were shooting over 90% from the field. Was it good shooting? Yes, but what the Spurs were doing was being much more aggressive than in Game 2, attacking the basket, and doing their thing: moving the ball around, driving, kicking, looking for the best shot available.

The Heat need Mario to get his confidence back in Game 4.

It’s often tempting, after a poor performance, to change things up a bit. You know, “that didn’t work, so we’ll try something different.” When things aren’t going your way, it’s important to get back to what you’re good at. Do your thing, and don’t worry about what the other team or your opponent is doing.

It’s not like there wasn’t some pretty bad Miami defence helping the Spurs along at times, but Leonard, Danny Green (15 pts, 7-8 FG, 5 steals), Tim Duncan et al., clearly had the more aggressive mindset. This is us. This is how we play. Watch us work.

San Antonio scored 71 points in the first half.

In the third quarter, it was Miami’s turn to be the aggressor. For a while, they got back to the way they play. Swarming aggressive defence, hustle plays, gang rebounding. Coach, Erik Spoelstra said at half time, “if it takes eight or nine efforts on one possession, so be it,” and that’s exactly what we saw from the Heat at the start of the second half. And this aggression from the Heat seemed to get to the Spurs.

With 3 or 4 minutes left in the 3rd quarter, I felt like the Spurs sensed the momentum was swinging away from them, even though they were still up by 15. They had gone away from what they do best and their 25 point lead had cut to under 10. Dwayne Wade did what he does best and was fantastic. LeBron James did what he does best. Mario Chalmers did… well I’m not sure what Mario Chalmers did, but the Heat were the better team in the 3rd quarter.

But after that brief wobble, it was the Spurs who finished the game playing their way again.  When things aren’t going your way, get back to what you do best: tried and tested strategies. Once you’ve made a couple of solid plays, doing what you’re good at, then the confidence comes. Confidence to drive to the basket, confidence to pull up and take that 3 point shot on the break. Go after what YOU want, playing the way YOU want to play.

Be aggressive and do your thing.

San Antonio take the 2-1 lead , but expect the Heat to get back to playing their way in Game 4.